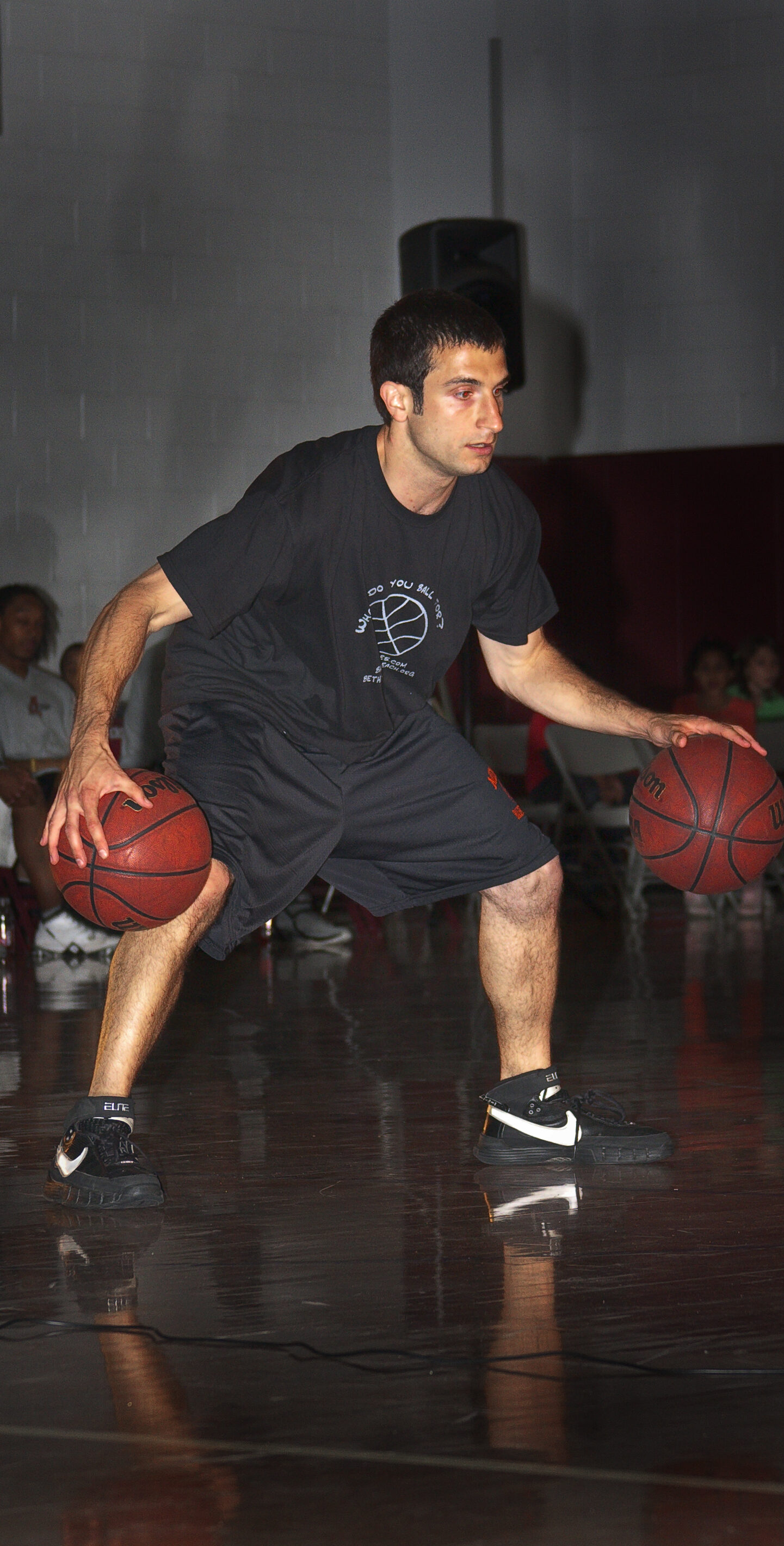 Dan Occhiogrosso took a simple challenge in the seventh grade from a successful college basketball coach that changed his life forever: practice your dribbling for five minutes a day. Accepting that challenge not only helped him become an incredible ball-handler, it also led him see that he could play basketball for something bigger than himself. After playing four years of high school basketball at Hackensack Christian Schools in New Jersey, “Occh” went off to play four years of college basketball at Baptist Bible College in Clarks Summit, PA. Through both great success and failure he simply continued to dream about using basketball to accomplish something big in the world.

Two years after graduating college, Occh became burdened with how many people AIDS was killing in Sub-Saharan Africa and how many orphans these young parents were leaving behind. But how could Occh’s basketball abilities do anything to help these children? He decided to dribble the 2007 New York City Marathon with a basketball to raise funds and awareness for friends who were rescuing these orphans in South Africa. Occh’s efforts then began to inspire his friends across the country to dribble running events to raise even more help for people in poverty around the world.

One month after completing the marathon, Occh put his dribbling skills to music for a faculty talent show at the high school where he was working. This led to forming Create the Crossover, a presentation he has now done in schools and communities around the world. Besides being a motivational speaker Dan is a substitute teacher and coaches tennis and basketball at Memorial High School in West New York, New Jersey. He dreams of one day teaching English or Italian in an urban high school after his days of dribbling basketballs are over.

Substance Abuse: Occh’s dream of accomplishing something great through basketball not only kept him away from drugs and alcohol, but eliminated the desire to do so. Create the Crossover will inspire people to live for bigger things so they do not need to turn to substances to help them escape reality or try to fit in with their peers. Instead, they can have something greater that will truly satisfy them.
Bullying: Occh was judged and laughed at throughout his story. However, because he had something bigger in his life, he was able to handle the adversity and overcome it. His dreams left him no time or desire to bully others. Because Occh does not necessarily look like a good basketball player, his dribbling skills reinforce the point that people should not judge others by the way they look or seem, but rather give others a chance and get to know them. Helping the orphans of South Africa also teaches that certain people are not better than others, we have a moral obligation to stand up for the oppressed, and when we stand up against injustice we receive a greater happiness than when we try to put ourselves above others.

Goal Setting/Achieving Dreams: Occh’s dribbling skills have consistently inspired crowds to think about how they can live for bigger things through their own talents and abilities. Create the Crossover emphasizes the fact that we are not able to fully see the potential of our lives, but when we take the step to live for something bigger than ourselves, we can come to realize a greater potential than we ever thought possible. Occh’s humanitarian work through basketball also demonstrates that achieving our dreams may look different than what we originally set out to do.

Abstinence: Create the Crossover emphasizes several points that are easily applied to the issue of abstinence: having respect for yourself and others; being willing to sacrifice lesser pleasures for a much greater happiness; living for things that last and not momentary feelings; deciding to live for what you truly want in life instead of what others tell you to live for.

Peer Pressure: Occh’s story begins by making a decision not to play basketball the wrong way like everyone else his age was, but instead to take a path that would lead him to bigger and better things. Throughout his story Occh had to decide whether he wanted more to impress others or to become who he really wanted to be. Create the Crossover emphasizes caring more about “the bigger” you are living for than the approval and criticism of others, while also prioritizing the approval and criticism of those who actually do care about you.

Self-esteem: Living for something bigger will always improve self-esteem. Occh gained his self-worth and self-image not from focusing on how special and unique he was, but rather by living life for something bigger than himself.
Fitness: When people believe that their lives can accomplish great things in this world, they begin to take better care of their bodies. Occh’s dribbling show is also an inspiring way to motivate people to use their bodies athletically and see what they are capable of achieving physically.

“I just wanted to thank you again for coming yesterday. The feedback that was received from the kids and teachers was amazing! You really were engaging to the students and are an amazing role model!” –Danielle Leva, Student Assistant Coordinator and Middle School Anti-Bullying Specialist, Elmwood Park Memorial Middle/High School

“I just wanted to thank you so much for yesterday’s assemblies. I was really upset I wasn’t able to stay because I really enjoyed your presentation at the SAC conference. I was able to speak to the Principal and the Assistant Principal and they were both thrilled with how it went. The principal pointed out how much he appreciated the fact that you tailored the 2 assemblies to the specific grade levels and how well you kept everyone’s attention. The Assistant Principal just told me he personally felt like he got a lot out of it and mentioned he would be reaching out to me about possibly suggesting it for his own kids’ schools. Thank you again for everything and keep up the great work! We need amazing speakers like you.” — Mairin Schramm, Student Assistance Counselor and Key Club Advisor, Hammonton Public Schools, Hammonton, N.J.

“Dan Occhiogrosso was not only a great speaker, but an individual who was able to inspire over 600 Freshmen to become the men and women they know they can be. His basketball skills are second only to his powerful and inspirational message of hope and faith.” — Martin Gurczeski, Freshmen Class Advisor, Bayonne High School, Bayonne, N.J.

“I was subbing at South Amboy High School and was lucky enough to see an outstanding motivational speech. You are amazing, and I believe you could really relate with the students. You really are doing something positive for our children. Keep up the great work! My son is in middle school in Sayreville. He loves basketball, and I wish he could see you do those dribble drills. I know his whole basketball team would enjoy it also.” — Mrs. Terri Gelpke, mother and substitute teacher, South Amboy High School, South Amboy, N.J.