Elaine Lowry Brye, Army brat turned ROTC candidate turned military wife, is the mother of four military officers in the Army, Navy, Air Force, and Marines. Her book, Be Safe, Love Mom: A Military Moms Stories of Courage, Comfort, and Surviving Life on the Homefront, has been called a service manual for military moms. Elaine’s mantra is simple “We have to be braver than our kids.” She motivates Americans to remember their strong roots and band together. She speaks on raising patriots – brave children who can meet the challenges of life. Elaine believes that life in the empty nest can be filled with purpose and speaks to women about finding their passion in the later part of life.

Elaine Lowry Brye is a mom who knows about letting go.  Like many moms, she cried when her kids left home, wishes they’d call and write more, and spends sleepless nights worrying about them.  But Elaine’s tears and concerns are even more poignant than most mothers’—because Elaine is the mom of four military officers, one each in the Air Force, Army, Navy, and Marines. 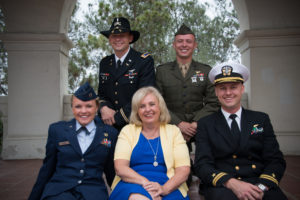 An Army brat turned ROTC candidate turned military wife, Elaine never expected her kids to have a call to serve, and certainly didn’t expect all four to join up.  Three of her kids—two sons and a daughter—attended the Naval Academy, and it was there that Elaine got her own calling: she joined the Naval Academy Parents’ Listserv, and began a fifteen-year journey of helping moms and dads adjust to their strange, new, lonely lives as military parents. She also spent a year teaching in Kabul, Afghanistan where she experienced life as a military mom in a war zone. Her love of her country and desire to support her fellow parents led to her to write Be Safe, Love Mom: A Military Moms Stories of Courage, Comfort, and Surviving Life on the Homefront. 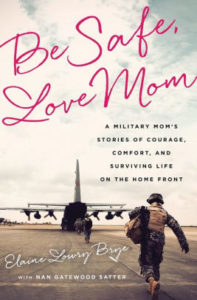 When you enlist in the United States Military, you don’t just sign yourself up for years of duty, you also commit your loved ones to a life of service all their own. Brye’s father and mother met while both serving in the U.S. Army and her childhood was that of a typical army-brat, with frequent moves—some to faraway countries—dinner-table conversations full of military lingo, an ever-present anxiety during her father’s deployments to Vietnam and elsewhere, and family vacations to national monuments and battlefields. In 1976—the first year women were accepted in the service academies and ROTC—Brye herself enlisted in the Air Force, where she would later meet her husband, an Air Force pilot.

When she’s not writing or hosting motivational retreats at Rubicon Ranch, located in western Montana on the edge of the Lolo National Forest, near the Clark Fork River, Elaine is on the road sharing her message of encouragement, resilience and inspiration with audiences of all ages.

“I learned growing up in a military family that I had a responsibility to do my duty—it meant supporting my dad through two war deployments and 17 moves. It meant honoring my country. Now I do the same thing for my children, who are living out their calling toward a higher purpose.” – Elaine Brye 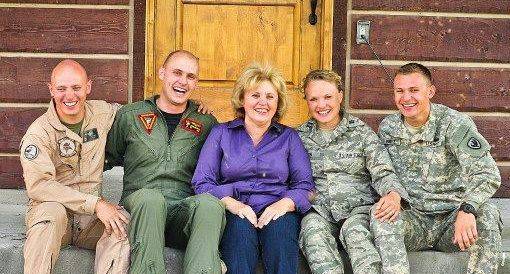 When I think of a true American hero, I immediately think of Elaine Brye. She represents all that is good in this country. We had Elaine speak at our PsychArmor gala in 2016 and she was the favorite of the evening. She is articulate, empathic, and heartfelt, a combination rarely seen together. Her warm nature makes you feel like you’ve known her your whole life. It’s an honor to know Elaine and would recommend her in a heartbeat for anything she is willing to engage in.

“Elaine’s story has captured a nation, from her entry on the national stage at the 2012 Democratic National Convention, to her best-selling book.   She’s a mom who can relate to any audience through her passionate story-telling, love of country and always good humor.  Elaine is an example of what’s great & wonderful about America:  a mom who understands the sacrifices our men and women in uniform make every single day, her patriotic pride for our nation, and her unbending hope for the future.  Your audience will stand up and cheer, once again feeling good about our country.”